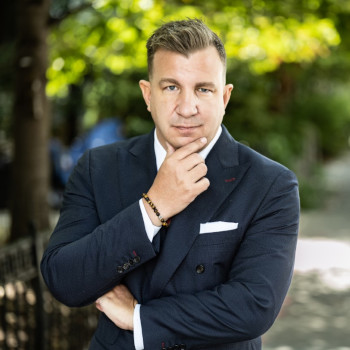 Jason Mandel has nearly two decades of real estate sales experience and is recognized as a leader within the luxury market.

With his finesse in negotiation, personal style, and stand-out sense of humor, he is alluring the most prestigious & affluent as well as modern millennials, who find Jason the only one they can trust and who understands their needs - Jason has a valued data-driven proposition that everyone wants. As a regular on the HGTV television network, Jason appeared on six seasons of “Get it Sold” and “House Hunters” and has been featured in Capitol File, Washingtonian Magazine, DC Modern Luxury Magazine, CBS News, NBC News, FOX News DC,ABC News and WTOP radio.

Not only has he worked with a number of Fortune 500 CEO’s, professional athletes, and political celebrities, he was named one of the Washington Area’s Top 50 most influential business people by DC Inno/Streetwise Media, and one of the DC Region’s top real estate brokers in 2015, 2016, 2017, 2018, 2019, and 2020 by Washingtonian Magazine, Northern Virginia Magazine and Virginia Living Magazine. He is ranked as one of “America’s Best” real estate agents by RealTrends, the national gatekeeper of residential real estate statistics.

Jason was born in New Orleans, which perhaps is where he gets his spice for life, which he has brought to the Capital Area for the past 30+ years. He distinguished himself as a top producer in the McLean office of Coldwell Banker, and moved his practice to Washington Fine Properties in 2010. He studied communications at James Madison University, and completed an executive certificate program in advanced negotiation studies at Harvard University.

Jason prides himself on working in all price ranges with a distinct keen eye for ‘luxury at every level’ throughout Northern Virginia,Washington, DC, Suburban Maryland, and the Virginia Countryside. Jason has a rescue dog, Mr.Arthur Miller (“Artie”), is an avid sailor, fitness enthusiast, and his favorite foods are Korean BBQ and traditional Indian cuisine. Jason’s passion for real estate makes his job one that he enjoys and considers himself lucky to be doing what he loves.

Jason's detailed, high-quality analysis of our neighborhood and of neighborhoods we were interested in for purchasing our new home is what led us to hire him. His top-of-the-line marketing of the house we put up for sale, superb negotiating skills, and individual attention are why we will never consider using a different agent in the future. My wife and I have bought and sold several other properties in the past, and no previous agents compared to Jason and his team in service, quality, and skill.

Worth noting: Jason sold our home in less than a week for more than our asking price amid the biggest blizzard that Washington, DC, had experienced in decades and negotiated a fair price (below asking) for the single-family home we now own.


I hired Jason in September to sell my house. From the very first time I met Jason and discussed my situation, he start sending all the information that I needed to prepare for the sale. He was quick to have the open house and used every advertising mechanism possible to sell my house. In the first week the house was on the market we had a lot of traffic. Jason gave me up-to-the-minute details on what was going on. He used every mode of communications to keep me informed and discussed with me the next step.

The house was sold in two weeks, which was great, and it saved me a lot of money. I highly recommend Jason. I am very happy that I made the right choice.


Jason went above and beyond the normal expectations for a real estate agent. While buying our first home, we looked at quite a few houses throughout the District of Columbia. Jason helped us to understand what we really wanted in a house, which was very different from what we initially thought that we wanted in a house.

In the end, we purchased the home that was right for us at the right price; the house appraised at $20,000 higher than our final sale price.


Jason is a fantastic agent with the attention to detail and patience to deal with many viewings, many offers and a great deal of negotiating.


We contracted with Jason as a buyer's agent based on a recommendation from friends in the area who had previously worked with him—and were they ever right! Jason's knowledge, professionalism and great personality put him at the top of the list of real estate agents that we have ever worked with. Throughout our househunting experience, Jason was completely flexible to meet our demanding schedule relocation from out of state, and we always felt like we were his only clients (although I know that was not the case).

He expertly guided us through the house-hunting and purchase process with keen insight of the metro area. Jason has our strongest possible endorsement and recommendation! We will certainly look him up if/when we ever need to sell our home!

My situation required an agent who was more business partner than real estate advisor. Jason showed himself as exceedingly professional, on top of "the numbers" and adept at marketing and social media. Jason exceeded my high expectations when it came to performing under deadlines without compromising my bottom line.

In a very challenging negotiation Jason fought hard and well for our interests. Jason and WFP are tops in this region and in the country for a reason—they are an all-star firm with all-star players such as Jason Mandel.

Jason helped us purchase our first home this past spring. Jason's experience with the home-buying process and attention to detail are truly unmatched. He was readily available to answer our many questions and worked around our schedules to make sure we could go see each house in which we were interested with him.

After some extensive searching, a house that matched all of our criteria came on the market. Jason took us to see it, and we quickly decided that this was "the house." Jason immediately contacted the seller's agent and found out that there was already another offer presented to the sellers. Jason's quick response, professional nature and superb negotiating skills helped us to secure the house as our own. We are grateful that we had the opportunity to work with Jason and are incredibly happy in our first home. We would highly recommend Jason—you will not be disappointed!

Jason was a fantastic real estate agent. During our three-month home search process, he showed us a lot of houses; literally all of the houses on the market that met our criteria and some of them several times. We spent so much time with him that I think that our infant daughter thinks he is family.

One of the amazing things is that, even though he had several other clients at the time, he always had time for us; evenings and weekends he was always able to make time for us and work around our busy schedules. We really appreciate all of Jason's hard work in getting us into our home.

I hired Jason to sell my condo in Arlington and to help purchase my new home in Logan Circle. From the beginning, I made it clear that I wanted top dollar for my renovated apartment.

I was very impressed with Jason's knowledge of the North Arlington market, and he helped me identify the best possible price range for my property. Through his marketing program we received multiple offers on my old condo, and it sold in less than a week. Further, I had to compete with multiple offers on my new condo, and with Jason's expert negotiation skills, we out-maneuvered the other competing offers, and I'm thrilled to be living in my beautiful new home in Logan Circle.

Jason is the best at what he does—he is trustworthy, knowledgeable, an effective communicator and a brilliant negotiator.