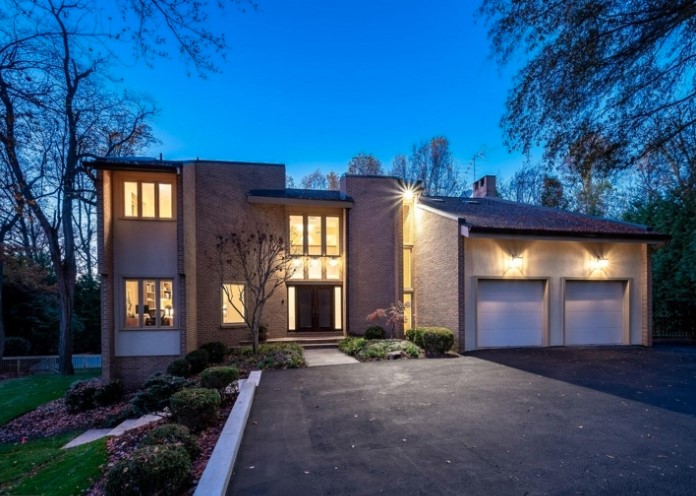 Situated on a quiet cul de sac in North Bethesda's most sough after neighborhood, this home is timeless and perfect for today's lifestyle. Custom-built for these original owners, it incorporates an open floor plan with 5,700 square feet of living space beautifully sited on a private half an acre, conducive to today's more informal living. Gracious landscaping surrounds the property, and a newly renovated heated pool and flagstone patio, makes for ideal outdoor living. The interior is special. The "user-friendly" floor plan features a two-story, 18-foot entry foyer with balcony overlook and clerestory windows above the double-door entry with etched glass side panels. The first floor has nine-foot ceilings throughout. A focal point of the main level is the large living room with skylights in the vaulted ceiling and a wood-burning fireplace with marble trim and hearth. Both the living room and dining room have doors to the deck and overlook the backyard and swimming pool. 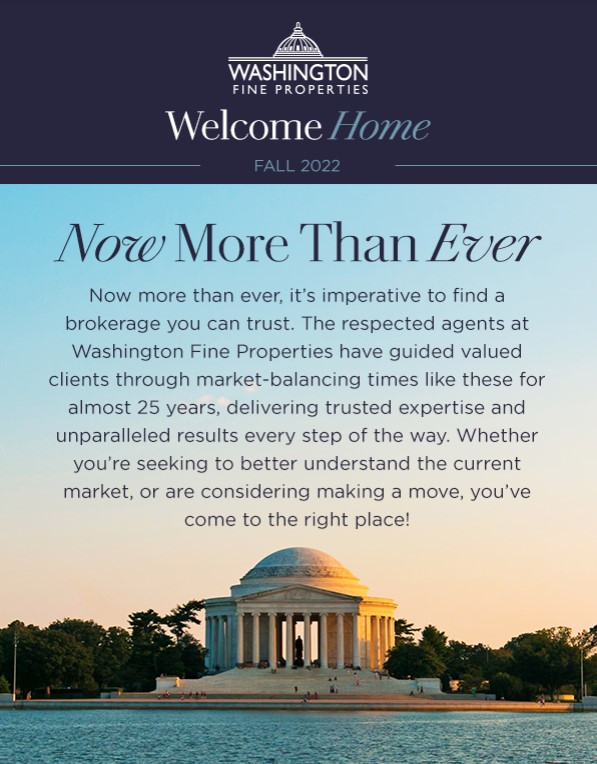 Now more than ever, it's imperative to find a brokerage you can trust. The respected agents at Washington Fine Properties have guided valued clients through market-balancing times like these for almost 25 years, delivering trusted expertise and unparalleled results every step of the way. Whether you're seeking to better understand the current market, or are considering making a move, you've come to the right place!

This architecturally spectacular estate in McLean spans more than 12,600 square feet, including a guest cottage. The home was built by renowned architect and designer Rob Morris. The Manderley Estate is timelessly designed to offer entertaining on a large scale and a welcoming multi-generational retreat. Enjoy the winding cherry tree lined drive to the charming cobblestone courtyard entrance. The one-of-a-kind custom stone English manor is covered in meticulously manicured ivy surrounded by mature landscaping and trees with a separate 100-year-old renovated guest cottage.

A seven-bedroom home in a section of DC known for large ambassadorial residences just re-entered the market. The 11,000 square-foot house at 2425 Foxhall Road NW was re-listed on Monday with Margot Wilson of Washington Fine Properties for $14.25 million. Completed by Banks Development Co. late last year, the home, designed by GTM Architects, was built for an American family now living in London. The family has decided to stay abroad and is selling the home. It was originally listed in February for $20 million. As expected of a home carrying this price tag, the rooms have a grand scale meant for entertaining with tall ceilings and large windows. Outdoors, there are terraced gardens and a south-facing loggia, swimming pool, and a large entertaining space. Each of the seven bedrooms is en suite and there are two large offices. 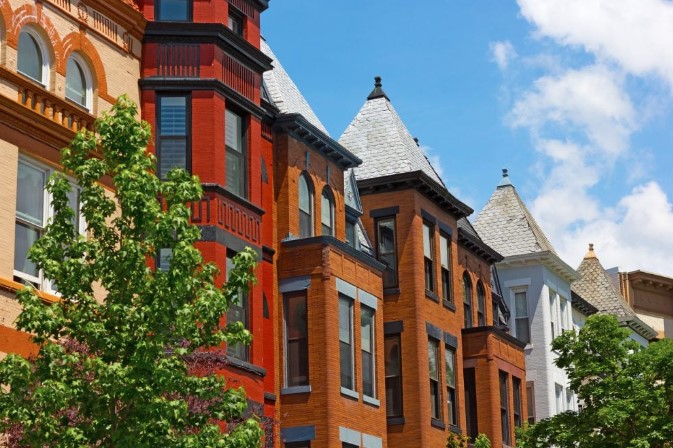 You likely already know this, but we'll tell you again: Things are expensive right now. Inflation affects everything from gas prices to airfare to the bill at a restaurant. It also affects mortgage rates: The average rate for a 30-year fixed mortgage recently rose to over 7 percent for the first time in 20 years. That's a sharp contrast to where we were in the height of the Covid-era market, when rates dropped as low as below 3 percent. That led to a crazy competitive housing market that left sellers in an enviable position - you've likely heard the stories about lines around the block at open houses, buyers waiving all contingencies, and homes selling for way above listing prices. So - with rates spiking, are DC-area agents seeing a flip to a buyers market? Robert Hryniewicki of HRL Partners at Washington Fine Properties says: "We're going from a marketplace that was hyper-charged, where you would put a listing for sale on a Thursday, and by Tuesday, you'd have 12 offers," he says. "Now if you've come for sale, it might take two weeks or four weeks even, for a contract to materialize. That is normal." 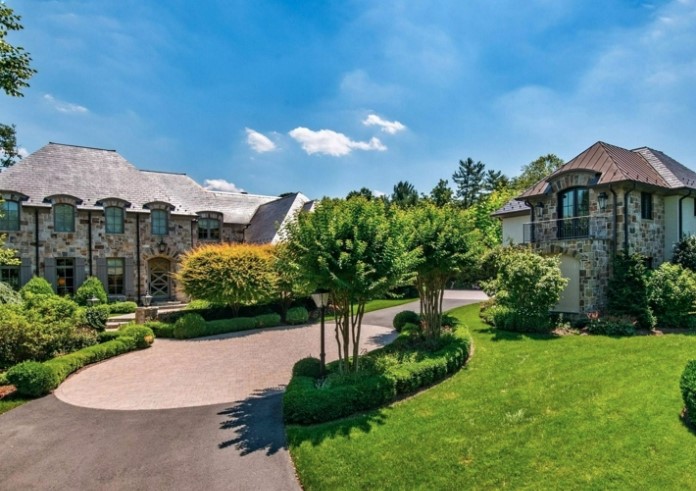 One of the most luxurious estates offered in prestigious Langley Farms is next to the iconic and historic Hickory Hill. Inspired by grand European estates, the home boasts remarkable beauty at every turn. A gated entrance welcomes you to the arrival court that is surrounded by immaculate landscaping that includes Coral Bark Maples for all-season interest. The handcrafted Mahogany and glass entry door leads you to the Foyer that opens to the Living Room with Antique doors from France that discretely retract into the walls for privacy opening to the ultimate Study with gorgeous bookshelves and fireplace with a custom mantle. The Dining Room boasts a custom pattern ceiling created by artist David Wiggins, a matching set of mirrored doors, custom chandeliers and French doors that lead to a courtyard with an antique water fountain. There is hand-scraped walnut flooring throughout with subtle herringbone design and random width wide planks. The remarkable Kitchen with custom Prevo cabinetry with a spacious island, top-of-the-line appliances and imported backsplash from France opens to the cozy Family Room. The Breakfast Room and Sunroom have antique brick walls each with doors leading to the patio making a statement with an antique brick fireplace in the center. To complete the Main Level there is a Butler's Pantry, Mudroom, Elevator and two Powder Rooms. 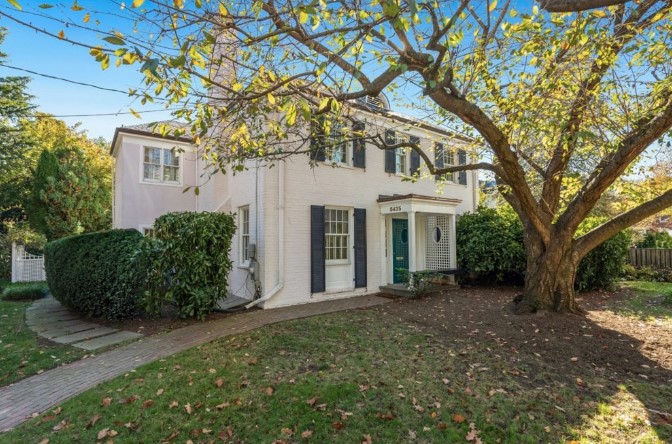 Civil rights leader Julian Bond's former home is for sale in Chevy Chase DC. The four-bedroom, four-and-a-half-bath Colonial was originally built in 1939, and is on the market for $1,665,000. The home also comes with a finished basement, a patio, and gardens. Bond, who died in 2015, was one of the founders of the Student Nonviolent Coordinating Committee (SNCC), and went on to serve as the chair of the NAACP. He also co-founded the Southern Poverty Law Center, and served in Georgia's state legislature. Bond was also a longtime resident of Chevy Chase DC. He and his wife, Pamela Horowitz, bought the house in 1994, and Horowitz remained in the home until recently. A park bench outside of the Chevy Chase Community Center is dedicated to Bond. 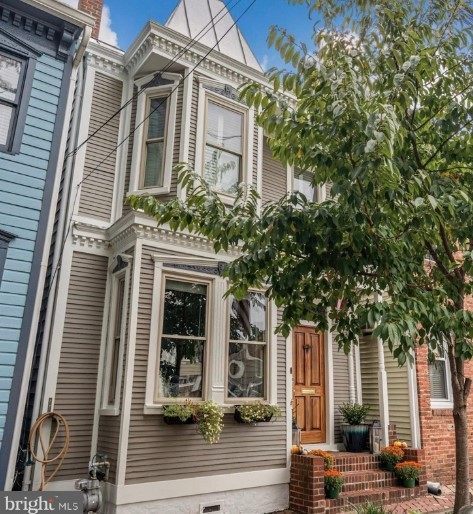 Victorian charm meets modern living in this three-bedroom townhouse in Old Town Alexandria. Enter through the front door while admiring the stained glass window above, and you'll be in the living room with a bay window and gas fireplace. The formal dining room comes with a chandelier, crown molding, chair rail and hardwood floors. The kitchen fits modern lifestyles with granite counters, stainless steel appliances and custom cabinets. French doors lead from the kitchen to a garden with its own fountain. A Victorian staircase leads to the second level, where there are three bedrooms and original hardwood floors. The primary suite has its own balcony and renovated bathroom.

Some houses are filled with so much history and historical features that they are more like museums than homes. You can't imagine anyone with young children in such a house. But this stately rowhouse in the Logan Circle neighborhood of Northwest Washington has been home to a family of four for more than a decade. James Iker and his husband Hayes Nuss moved into the house in 2008 and raised their now 12-year-old twins in it. "It doesn't live like a museum at all," Iker said. "It's built to work for a family. It's been a very functional house. It's a big house, but we use every bit of it." "The roof deck is definitely my favorite part of the house, especially in the mornings," Iker said. Even with the modernizations, many period features were preserved, most notably the fireplace mantels and tile surrounds in the living room, sitting room and library. The sitting, living and dining rooms are separated by pocket doors. They also kept a "talking tube," an early intercom system, which can be found in the upstairs hallway. Behind the house, there are two parking spaces with an electric car charger. The seven-bedroom, 10-bathroom, 6,600-square-foot house is listed at $4,995,000.

Welcome to 1801 North Herndon St., a beautiful custom classic colonial fully renovated and expanded by BCN in 2016 with a 0.25 acre lot that was meticulously crafted and designed by landscape architect Scott Brinitzer. Sitting proud on a corner lot, the home boasts 5 bedrooms, 5 full baths, 3 gas fireplaces, a two car side-loading garage, over 6,500 finished square feet, a front private dining patio and a back patio with a built-in gas fireplace. This gorgeous sun-filled home is the quintessential offering of classic architecture coupled with modern elegance.